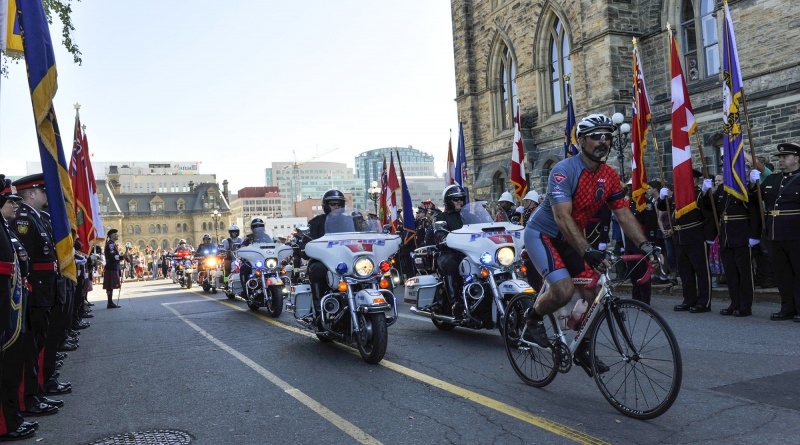 The ride will start on Wednesday, September 25, 2019 at 7:30 a.m. at the Ontario Police College (OPC) in Alymer and will conclude on Saturday, September 28, 2019 at 3 p.m. at the Canadian Police and Peace Officers’ Memorial in Ottawa.

Members of the Ride to Remember team will also meet up with the National Police and Peace Officers’ Run to Remember at the Ontario Police Memorial, 22 Queens Park in Toronto, on Thursday, September 26 at 8:00 a.m. for a brief ceremony.

The Ride to Remember team, in partnership with the OPP Youth Foundation, will also be donating new bicycles to 10 children along the way, including stops in Colborne, Belleville and Napanee.

Also this year, a team from Fredericton Police Force, led by Constable Sara Burns’ husband Steven Burns, will join the Ride to Remember contingent to honour the lives of Constable Sara Burns and Constable Robert Costello, who were killed in the line of duty on August 10, 2018, when they responded to a report of gun shots being fired.

The media is invited to join us at the OPC, the Ontario Police Memorial or at any of the rest stops along the route. Riders will be available for interviews.

The purpose of the ride is to raise awareness of the annual Canadian Police and Peace Officers’ National Memorial Service, where we pay tribute to more than 860 fallen officers. The 42nd annual Canadian Police and Peace Officers’ Memorial Service will take place at Parliament Hill in Ottawa, on Sunday, September 29, 2019 at 11 a.m.