During the 1984 service in Ottawa, a Memorial Book of Remembrance for police and peace officers killed in the line of duty, was introduced by the Office of the Solicitor General and the Canadian Association of Chiefs of Police (CACP).

On March 22, 1994, Prime Minister Jean Chretien joined the more than 700 police officers and relatives of slain officers at a site behind the Parliament buildings. The Canadian Police Association (CPA) and the CACP dedicated the new Canadian Police Memorial Pavilion and the granite stone at the base of the pavilion that displays the names of the officers who made the ultimate sacrifice. 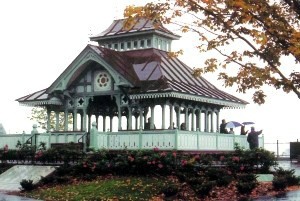 When the granite stone was unveiled in 1994, it displayed the names of 227 police officers killed in the line of duty since 1879. Two other stones were also erected; one for peace officers killed in the line of duty and another explaining the pavilion’s history. In 1995, the memorial honour roll was expanded to include the names of slain officers from other Canadian law enforcement agencies, including the Ministry of Natural Resources, Customs and Excise, Fisheries and Oceans and Conservation.

As the turn of the millennium, approached, the granite stones and memorial book presented several challenges. In 1999, the CPA, the CACP and the CPOMA worked collaboratively with official from Public Works and Government Services Canada to design a new honour roll to enhance the memorial Pavilion  site, compliment the design features of Parliament Hill and provide sufficient space to recognize our heroes for another 100 years.

The parties agreed upon a glass panel monument to be erected along the perimeter wall, adjacent to the Memorial Pavilion. The new monument enhances the existing Memorial Pavilion, provides a lasting tribute to our heroes and ensure future generations will be provided with a striking reminder of the sacrifices of our fallen heroes. The new honour roll was unveiled in conjunction with the 2000 Memorial Service, as part of Parliament’s millennium celebration, replacing the granite stones and retiring the Memorial Book of Remembrance.

The 1978 ceremony opened with a two-gun salute, fired by members of the 30th Field Regiment of the RCA. This symbolizes a long-standing association between the Ottawa Police Service and the 30th Field Regiment, also know as the Bytown Gunners. Both were founded in 1855 and have a long history of mutual support in difficult times; from civil unrest in the early days of Canada’s history, to royal visits in later years. After the salute, one brass sell case was saved and mounted a s commemorative piece with the inscription – To fallen comrades, Parliament Hill, September 24, 1978 – along with the badges of the Ottawa Police Service and the Bytown Gunners mounted above and below the inscription. The piece was presented to the Ottawa Police Service on July 7, 1979.