On September 24, 1998, the Government of Canada officially proclaimed the last Sunday of September of every year as the Police and Peace Officers’ National Memorial Day. In announcing the commemorative day, the Solicitor General of Canada stated that “a formal, national memorial day gives Canadians an opportunity each year to formally express appreciation for the dedication of police and peace officers, who make the ultimate, tragic sacrifice to keep communities safe.” 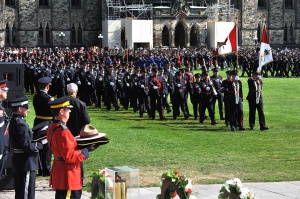 On January 17, 2003, a nation-wide half-masing was included in the new half-masting rules. The flags will be half-masted on all federal buildings and establishments in Canada, including the Peace Tower, from sunrise to sunset onf the Police and Peace Officers’ National Memorial Day.