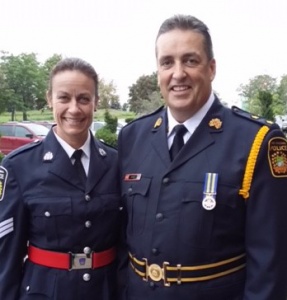 Taking on new spin on our Rider Profiles, we’re highlighting one policing couple who have participated in the Ride to Remember since 2010.

Brent joined Peel Regional Police in 1986. He has worked in a variety of bureaus including Old Clothes, Traffic, Morality, Homicide, O.I.G.E.U., T.A.D.E.U., Duty Inspectors office, Executive Office and most recently, he returned to the Homicide Bureau, but this time as the Officer in Charge. During this year’s ride, Brent will celebrate 30 years of police service.

Brent and Debbie met in 1997. Debbie recalls it being the happiest and luckiest day of Brent’s life. At the time, Debbie was not a member of the police service. She was in school and working towards her degree. In 1999, she put her studies on hold when she was hired by the Peel Regional Police. Since then, Debbie has worked in Uniform Patrol, Bikes, Airport C.I.B., Records, Professional Standards and Divisional C.I.B. 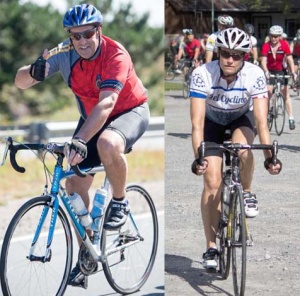 In the mid-2000s, Debbie switched from her love of running to road cycling. Shortly after this she persuaded Brent to get a bicycle and the rest, as they say, is history. Debbie is one of the founding members of the Peel Cycling Club; a non-profit group within the Peel Regional Police community, established to promote cycling and a healthy lifestyle.

Brent and Debbie rode their first Memorial Ride to Remember in 2010 and they do most of their training for the Memorial Ride near their cottage.

What the Ride to Remember Means to Them

“We were pretty naive that first year,” said Debbie. “We didn’t know what to expect but we just knew we were a part of something special. There is no describing the feeling of camaraderie or the friendships you make, peddling those sometimes gruelling 700 kilometres to Ottawa. What an incredible and humbling way to pay our respects and to remember those who have made the ultimate sacrifice.”

“Some years are harder than others to find the time to train properly,” said Brent. “But the one thing that keeps me going is pure determination.” At 6’2” and somewhere over 250 pounds, Brent can often be heard yelling ‘move over, big guy coming through’ as he peddles past others up some of the hills.

Memorable Moments: We love to travel and are fortunate to have visited some pretty spectacular places. However, without a doubt, walking the Inca Trail in Peru for four days is one of our highlights. The elevation makes it a truly challenging hike and the scenery is indescribable. Some of the mountain passes makes you feel like you are standing on top of the world and that anything is achievable. 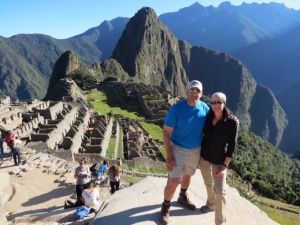