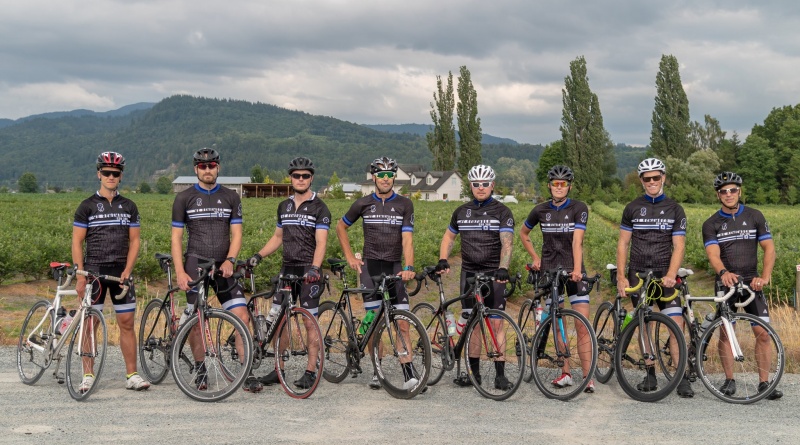 Meet members of the Abbotsford Police Department. They have joined us from British Columbia for the 2018 Ride to Remember. 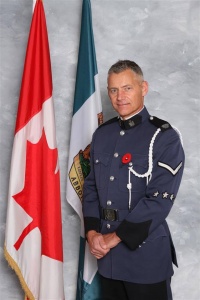 Team Profile: Abbotsford Police Department
Years on the Ride: First for most, second for two

Members of the Abbotsford Police Department (APD) have travelled a long way to be a part of the 2018 Ride to Remember.

Led by APD Chief Mike Serr, this year’s ride will be especially poignant for their team as they lost one of their own, Constable John Davidson, on November 6, 2017. Constable Davidson was responding to a report of a stolen vehicle when he was shot and killed. Thousands of officers, civilians and members of the community turned out to honour Constable Davidson’s ultimate sacrifice for his community. And now their nine member Ride to Remember team will make the 700-kilometre journey to ensure their hero, and his sacrifice, is never forgotten.

Newly sworn in Chief Mike Serr began his career in 1990 with the Vancouver Police Department. His extensive career includes being on foot patrol in one of the poorest communities in Canada. This gave Mike a great opportunity to connect directly with those living in that area. He has worked in the Organized Crime Agency, Major Crime Unit, BC Municipal Undercover Program and Integrated Gang Task Force.

Mike was promoted to Inspector in 2011, he was assigned to the Professional Standards Section and the Organized Crime Section before joining the Abbotsford Police Department as the Deputy Chief, working in both the Administrative Division and Operations Division. In May 2018, he was selected to be the next Chief of the Abbotsford Police Department and assumed the role on September 20.

Mike is fairly new to biking with this only being his third season. APD has a strong biking tradition with many exceptional riders. He first became involved in the BC Law Enforcement Memorial Ride in 2016 and rode again in 2017. After Mike’s first BC Law Enforcement Memorial ride, he learned the importance of unclipping from his peddle when he stops and is optimistic he won’t embarrass himself on this year’s ride.

Although he always thought of those who had made the ultimate sacrifice, he never had a personal connection. All that changed on November 6, 2017. 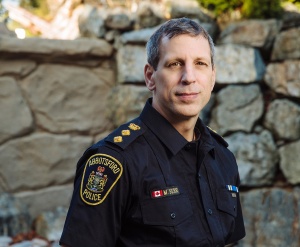 “The call came over the radio that no one ever wants to hear, ‘Shots fired. Officer down.’ Being at the scene and later at the hospital with Constable John Davidson was very difficult. But even more difficult was having to tell John’s wife and children that their husband and father had died in the line of duty.

I also experienced first-hand the impact such a tragic loss has on a police department. Despite the tragedy, he also saw great resiliency in his organization. I was humbled by the courage, compassion, and empathy that the APD demonstrated.

I was also truly inspired by how the policing community are there to support a department who is so impacted by a tragic loss. Police officers across the province immediately came in on their own time to help support APD and work for our officers impacted by this. Police chiefs dedicated their resources to assist APD and never asked to be reimbursed. On the day of Constable Davidson’s funeral service, other police departments came into Abbotsford to police our city for us so we could mourn the loss of our brother officer.

The Chief said at the service that when we lose a brother or sister that we need to ensure we take care of ourselves and take a knee if we need help.  This is very important, but we also need someone to be there to help us stand back up.  That is what our brothers and sisters in policing and the community did for us and we are forever grateful.

APD is honoured to be participating in this year’s Canadian Police Memorial Ride to Remember and we will be proudly wearing our Constable John Davidson’s riding gear to honour his memory.  On the back of our jerseys is the Latin phrase “Flecti non Frangi” which in English means, “To be bent, not broken”.  It refers to one who can endure hardship yet still remain true to themselves. Police officers across this country have endured loss but as a group we are forever strong.”

Detective Roy McBeth
Years of Service: 15
Years on the Ride: 2

Roy has worked in a variety of units such as Frontline Patrol, Strike Force, Intel, Bike Squad and is currently assigned to the Domestic Violence Unit.

Not letting a kidney transplant slow him down, Roy is an avid cyclist, competing in a number of mountain bike, road and triathlon events including Xterra World Championships and several Ironman events.

“In November 2017, we lost our friend and brother, Constable John Davidson.  It is an honor and a privilege to represent APD and his family at this event.  This is my second time participating in the Canadian Police and Peace Officers’ Memorial Ride to Remember and I am looking forward to honoring our fallen brothers and sisters and showing support for their families.”

Chuck joined APD eight years ago and has been serving his community on Frontline Patrol, the Emergency Response team, Use of Force Instructor and as a Critical Incident Stress Management team member.

“I worked closely with Constable Davidson’s family during that tragic time in November 2017 and continue to keep in touch with them. I’m riding to honour John and his family at this year’s ride.”

Craig has been an officer in British Columbia for 17 years. He started his career with the Delta Police Department, where he was employed for eight years, until transferring to the Abbotsford Police Department in 2009.  During his career he has worked on Frontline Patrol (including bicycle duties), as a member of the Municipal Integrated Emergency Response Team (MIERT) and with the Abbotsford Police Department Emergency Response Team for eight years.  Craig was also assigned to the Major Crime Unit and as of July 2018, he has returned to his Frontline Patrol roots.

Craig is an avid cyclist and has taken part in cycling events including Cops for Cancer in 2013 and the Ride2Survive in 2014 and 2016.  Ride2Survive is a one-day, 400 kilometre ride from Kelowna to Delta in British Columbia, where proceeds raised go directly to the Canadian Cancer Society.

“Being able to participate in a ride that honours the lives of fallen officers, especially one of our own, is an honour.”

Constable Shane Wiens
Years of Service: 11
Years on the Ride: 2

Shane began his career 11 years ago and spent his first four years on patrol. He then transferred to Bike Squad where he spent two years, and was bitten by the riding bug. Since that time, Shane started to ride on his days off and signed up to ride in the Cops for Cancer Tour de Valley. He rode two years with Cops for Cancer raising money for pediatric cancer research and in 2013, Shane participated his first Ride to Remember, alongside Roy, and had the privilege of riding with other members while honouring our fallen brothers and sisters. Shane is currently working with the Crime Reduction Unit

“In November 2017, Constable John Davidson was taken from the APD family. Riding in the memorial ride this year and being part of the parade on the grass of Parliament Hill when John is honoured for his service and valour will be difficult, yet an opportunity to pay tribute once again to our fallen members who have made the ultimate sacrifice.”

Constable Allison Bourne
Years of Service: 18
Years on the Ride: 1

Allison has had a varied 18-year career and is currently a member of the Forensic Identification Section. She was inspired to become a police officer by watching old episodes of ‘CHiPs’ while re-enacting them on her first bike, a Big Wheel.

Allison is an avid cyclist who’s always game for a bike ride. She was introduced to cycling in 2004 when she participated in one of three consecutive Cops for Cancer cycling tours raising money for children with cancer.  This inspired her to ride further and farther than she ever imagined.  Some other notable cycling events she has completed include four Ride to Survives, a one-day 400 kilometre fundraiser for cancer, Cycle Oregon, Ride the Rockies, Seattle to Portland and Cycle Greater Yellowstone.  Allison is a member of three local cycling clubs and enjoys teaching indoor cycling fitness classes.

“When you get into policing you hope and pray that you will never lose a colleague. When it happened, it was devastating. I am honoured to ride for my brothers and sisters in law enforcement who have paid the ultimate sacrifice.”

Mitch has now been a member of APD for a decade. He has served on Frontline Patrol for 4 years and then moved to the Emergency Response Team for five years, which included a secondment to our Gang Enforcement Team. In January 2018, he transferred to our General Investigative Section, but remains on ERT in a Collateral Duty Capacity. Through his time in ERT, Mitch had the opportunity to not only attend extensive training, but to start teaching as well. As a firearms, tactics and sniper instructor, he has supported APD’s newly formed Reintegration Training Model.

Mitch has been actively road cycling for the past five years and was introduced to it by friends at work. Through them, he has expanded his cycling to include riding in the occasional Fondo and trying his hand at criterium racing for a couple seasons. Mitch even took part in the BC Law Enforcement Memorial Ride last year.

“When Constable John Davidson was murdered, I wasn’t at work but came in to try and help where I could, but felt helpless. In the days and weeks immediately after that, the support we received from our surrounding policing partners was amazing. Members from jurisdictions more than 100 kilometres away were coming in on their own time to police our city and give us time to recover. I am honoured to be one of the APD members representing our agency in this year’s Ride to Remember to recognize the ultimate sacrifices made by John and our other fallen sisters and brothers.”

Mike has been a member of the Abbotsford Police Department since 2006. During that time, Mike has worked on Frontline Patrol, the Drug Enforcement Unit, Gang and Drug Unit and the Crime Reduction Unit. Mike is currently working as a Detective in the Major Crime Unit.

Mike has always had a passion for sports especially hockey, baseball, and running. In 2015, Mike bought his first road bike and began cycling with a group from the APD. In 2017, Mike attended the BC Law Enforcement Memorial in Victoria and participated in the annual memorial bike ride.

“I am looking forward to riding to Ottawa and honouring Canada’s fallen officers, in particular the memory of Constable John Davidson. I am especially proud to be riding among my APD family.”

Kevin began his policing career with APD at the age of 25. He spent five years on Frontline Patrol, then moved to the Bike squad before completing two secondments in the surveillance sections of the Gang Crime Unit. Over the last six years, Kevin has worked on the Abbotsford Police Emergency Response Team taking roles such as High Angle Assault, Breacher and Team Leader.

“One moment I will never forget, and hope to never repeat, was having the honour of being a pallbearer for Constable John Davidson’s funeral. It will be an honour to do this ride in his memory.” 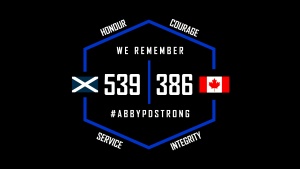